When recently considering the worse case scenarios for the world economy and the markets I thought it would be helpful to look at the development of the Dow Jones Industrial Index (DJII) in the 1930’s, 1970’s and compare it to its current market decline. 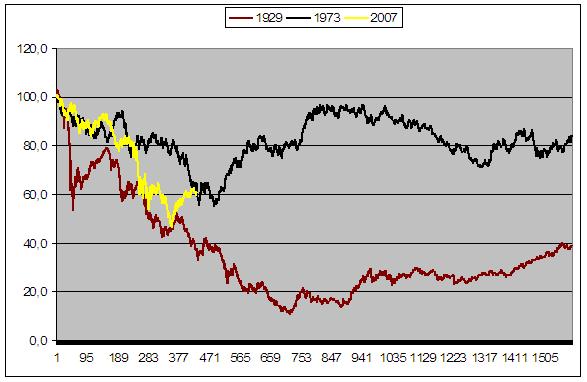 I normalised the index values (on the Y axis) from the start of their decline in order to compare the development in each time period with each other. The X axis shows the number of trading days.

Total declines from its highest to lowest point were as follows:

As can be seen, depending on what happens next, we have done relatively well compared to 1929 and worse than 1973.

Assuming the worse case scenario, that we have a replay of the crash of 1929 and the following bear market what are we in for?

After examining the stock market’s behaviour during the 1930s, it looks like a replay will not be as dreadful as it seems at first.

Purely looking at the index values it took 25 years to 23 November 1954, from its high, for the DJII to recover its losses from the high reached on 3 September 1929.

When however considering theinflation-adjusted total return index it took slightly less than eight years for returns to recover according to Wharton finance professor Jeremy Siegel.

The reason for the significantly shorter recovery period was two fold:

That may not be good news if you are hoping to recover your nominal bear market losses in just one or two years. But it’s a lot better than taking 25 years to recover your losses.

If we still follow the results of the 1930 bear market what would have happened if we invested after the market fell 50% from its high and held on for the next five years?

Again according to the calculations of Professor Siegel, over the five-year period following a 50% drop from the index high the stock market produced an yearly inflation-adjusted total return of 7%.

But if you wanted to see those returns you had to hold on through a 60% decline in the first five months after buying.

I am not sure if I would have held through such a decline.

But that just shows how quickly such significant losses can be made up in the market.

Because of the macroeconomic impact on the markets in 2008 and in Q1 2009 I have found it difficult to take my focus away from macroeconomic trends to focus on individual share valuation.

But with many companies now trading at significantly lower prices, there is considerably less risk of further large declines going forward, assuming the earnings power of a company is not permanently damaged.

The difficult question however it to determine to what extent the earnings power of a company has been damaged as a result of recent events.

Also with the implosion of the financial sector it is not easy to determine that the new normal state of the world economy will be.

This along with record high profit marginsdeclining to normal is making it very difficult to determine what normalised earnings will look like going forward.

This uncertainty will however create huge opportunities because of mispriced securities and the tendency of the market the throw the baby out with the bathwater.

What all of this means to you and me:

All in all interesting times.