Skip to content
Home/Newsletter Archives/Do you know the first rule of investing?
Previous Next

Do you know the first rule of investing?

What is the first, and most important, rule of investing?

The first rule of investing is Don’t Lose Money as so clearly put by Warren Buffett.

And to emphasise the rule Warren’s second rule of investing is never forget rule number one.

But what exactly does the rule mean?

It took me a while to find out but when I did it made a lot of sense and increases my investment returns.

The rule can probably be best explained by first saying what it is not. 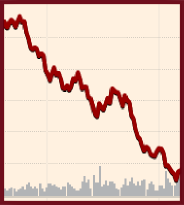 The loss of money the rule refers to, does not mean a price decline below your purchase price. The loss refers to a permanent loss of capital realised when you sell an investment of which the underlying or intrinsic value has declined.

If the share decline is not related to any change in the value of the underlying investment it gives you the opportunity to increase your investment because the company has just become even more undervalued.

You must thus avoid is selling out at a loss where a company has not declined in value.

The problem is how do you tell the difference between a company that has declined in value and one that hasn’t.

It is easier said than done as the following examples show:

Here is an example from my own portfolio:

In 2003 I bought into the French luxury goods company S.T. Dupont. The company was going along fine until all of a sudden its earnings collapse completely. The decline was a complete mystery to me and it happened without a warning.

With the increased security after the 9/11 terrorist attacks the carrying of lighters in aeroplanes were banned. This led to a complete collapse of the sales of the company’s main product and the reason for the profit warning.

Before I could sell my shares the company’s share price had lost 66% and the company needed new capital to survive, even though its financial position was not weak before the crisis.

Now you may be thinking, these are interesting examples but what is the point.

From the above examples you can see that it is very, very difficult for you to foresee the impact of seemingly unconnected events on the value of the companies you are invested in.

It is thus very difficult to be able to say if a price decline is because of a decline in the value of the business or just because of market movements.

I have thought long and hard about this problem and have come up with a solution that works for me and one you may want to consider.

It is the following of a strict stop-loss system. I know it’s controversial but hear me out.

I have implemented a system that works as follows:

This has in a lot of cases saved me substantial further losses as the share price went on to collapse completely.

It has of course also happened that the share price turned around and substantially exceeded my purchase price. But I have learned to live with that, knowing it could also have gone in the other way.

What I have also realised, looking at my trades over a number of years, is that if I had made a really good investment is typically works right from the start.

I urge you to give a system like this some serious thought.

For me investing is an activity where you place a bet with a certain probability of a positive outcome. Because I know that my investment process only selects investments with a high probability of success the only thing left for me to do is to limit my losses.

Once you have limited your losses, profits will take care of themselves.