Have you bought gold for your portfolio or at least considered doing so?

If yes, you are in good company as some of the best investors in the world (who stayed away from gold all their investment careers) have bought some.

But if value investors are known for their appetite of high-yielding investments and their desire to ?buy a dollar at fifty cents?, is gold an asset that fits into this universe?

In this short article I would like to offer you a framework of how to think about gold as a strategic investment for your portfolio.

I will not touch on if the gold price is a bubble. I think it is but that’s another story.

I will show you alternatives to gold that share the characteristics investors seek in their gold positions but are far more efficient investments at the same time.

At first sight, many macro-economic aspects strongly suggest a further increase in the price of gold (it already has increased from USD 250 per ounce in 2000 to more than USD 1.400 per ounce as of late 2010) is possible.

Like you, I have read countless reports on the effects the ?quantitative easing II? will have on the long-term stability of the dollar.

Also the European bailout of several countries brought to light the mind numbing fiscal problems in Greece and Ireland, while rumours around the fiscal health of Italy, Portugal and Spain are, frankly-speaking, hair-raising.

This mess came about because government decided to pay the bill banks left on the table when they left the credit party in 2008/2009.

Then, under the innocent sounding words ?fiscal stimulus?, governments started spending even more money running up disturbingly high deficits in 2009 and 2010.

As they did not have the money governments had to either borrow or print money to be able to meet these expenses.

All governments print money to meet expenses but never on this scale.

And this is what scares gold advocates?

And is what they mean when they talk about gold as a ‘safe haven? when all major currencies collapse.

Indeed, unlike paper money, gold is finite and would likely increase should the world run into a high-inflation scenario.

Now for more on what fund managers are doing.

If you follow well known value investors you have probably heard the name David Einhorn. David is founder and portfolio manager of Greenlight Capital, an enormously successful Hedge-Fund in based in New York. David is arguably one of the top money-managers in the world.

His investment process is straight forward and logical and he and his team do incredibly thorough research.

David is also very outspoken about his portfolio positions, for example, disclosing his bet on a decreasing stock price of Lehman Brothers just a couple of months before they went belly-up.

Although David has been in the game of identifying wrongly valued stocks and bonds his entire career, he has had gold as his biggest portfolio position for some time.

To learn why take a look at this video clip. If your time is limited go directly to minute 8:50 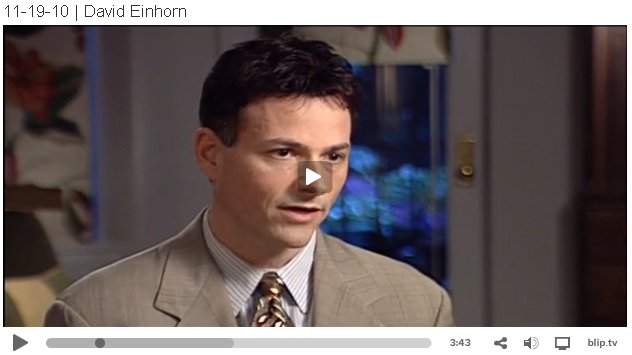 David makes it clear that he does not see gold as a commodity (the industrial use vs. production is not what drives the price), he thinks of gold as a surrogate for money:

I could not agree more with this assessment if you wanted to hold something more durable than a paper currency that can be ?printed away?. Think Zimbabwean dollar.

But why in the world would I want to own a currency in the first place?

In my view currencies are good only to be used as a method for payment, for transactions and emergencies.

I do not view currencies as an investment or storage of value and suggest you don?t either.

Now for a logical framework of how to think about gold as an investment as well as how to make your gold investments more efficient.

The first thing I want to suggest is to separate your gold investment into two categories; currency and investment.


Gold as a currency:

Only for this use would I advise you to hold some physical gold, which will only be useful in an economic Armageddon scenario.

Although I would assign a very low probability to this scenario, in an exceptionally harsh economic environment or crisis, gold will be of great value as a ?currency of last resort? (the same for goods such as cigarettes, medication or alcohol) but gold is easier to store.

So if you believe we are going to go back to the economic stone-age, buy some gold in small coins and keep them in a safe place in or close to home.

It will not cost you much and will be of great value if we end up in a Mad Max or Book of Eli type of world.

Gold as an investment:

Far more interesting than the extreme scenario of gold as a ?currency of last resort?, is its use as an investment in your portfolio.

Should you imitate David Einhorn and invest 15% of all you have into gold?

In stead of discussing the pros and cons with you, I would like to quote Warren Buffett who has the incredible talent of painting simple pictures out of very complex situations:

“You could take all the gold that’s ever been mined, and it would fill a cube 67 feet in each direction.

For what that’s worth at current gold prices, you could buy all — not some — all of the farmland in the United States. Plus, you could buy 10 Exxon Mobil’s, plus have $1 trillion of walking-around money.

Or you could have a big cube of metal.

Which would you take? Which is going to produce more value?”

Many gold investors describe their investment in yellow bricks as a ?hedge against deflation and inflation?. Granted, it may do okay in either scenario.

However, what is your aim when investing?

Call me old fashioned but I prefer good!

Now for two investment strategies that will provide you with good returns, no matter what the $, ? or ? does:

Do a stress-test by asking yourself: ?If we saw five consecutive years of 3% deflation (6% inflation)? What would the impact be on company XYZ??

Many of these companies carry ?investor yields? (dividend-yield + dividend growth) of around 10%, which will not end up being materially lower even if we saw a severe economic crisis.

2. Buy companies that derive most of their revenues from stable currency areas.

Do you worry about the long-term stability of the euro or the pound or the dollar? Fair enough, there are plenty reasons to believe that the best days are over for these currencies.

As an alternative look for companies that make their sales in currency markets that seem vastly more promising than the big-four currencies in the world (dollar, euro, pound, and yen).

While I am no macro-expert here are a few ideas.

All of these may be more stable currency areas over the next 5-20 years than the classic EUR/USD/YEN/GBP-mix.

Although it may require some effort to set up a diversified portfolio of healthy companies that operate mainly in their domestic markets. It will most likely not only free you from the currency horror stories but also provide you with a growing portfolio and solid dividends.

Which ever way you decide to invest (I prefer both) your portfolio will be much more efficiently positioned than with a negative-yielding gold position.

Keep some gold if you think you may need to run for the hills but don?t tie a heavy gold-bloc to your portfolio.