Home/Newsletter Archives, People/The best investment advice you will ever get
Previous Next

Have you ever heard of Ian Rushbrook?

If you have not I won’t be surprised. He was one of those rare investment managers who, without much fanfare, gave his investors outstanding investment returns.

The only reason I heard of Ian was because in 2003 when I read about him in the excellent book called Money Makers (Stock Market Secrets of Britain’s Top Professional Investment Managers) by Jonathan Davis.

Ian was investment director of the UK based Personal Assets Trust PLC (PAT) investment trust – same as a US closed end fund – from 1990 until his untimely death on 12 October 2008, in Edinburgh, aged 68.

From 1990 to 2008, investing mainly in large blue-chip British companies, Ian built up an enviable track record of substantially beating the market as shown in the following graph. 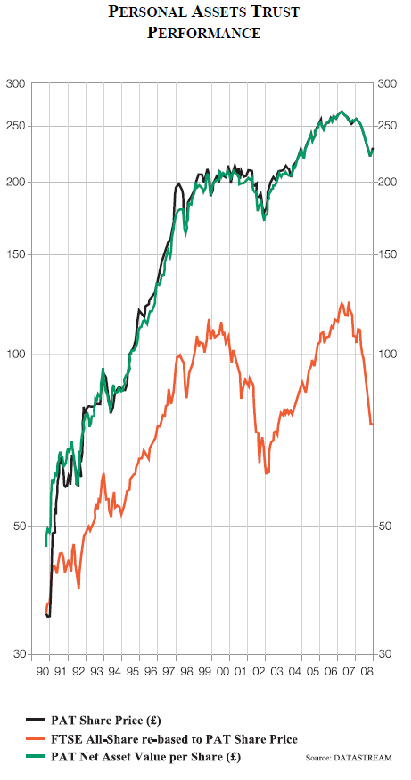 Luckily Ian left us with the essence of his investment strategy which is most likely the best investment advice you will ever get. But more on that later, first a bit more information about Ian.

Ian also overcame a problem most investment trusts and closed end funds have, of the shares always trading at a discount to their net asset value. Ian did this through share buybacks coupled to the issue of new shares when demand exceeded supply.

How successful Ian was at eliminating the discount can also be seen in the graph above, where the net asset value and the share price of PAT are almost identical.

As an aside, Ian was an admirer of Margaret Thatcher and was proud to have acquired, for a personal donation of GBP100,000, one of her celebrated handbags in an auction in aid of the Breast Cancer Care charity.

Now back to Ian and what he can teach you about investing.

In one of PAT’s quarterly newsletter (past copies can be found here) I in August of 2001 found the essence of Ian’s investment success simply called:

1. Only invest in companies with growth in revenues per share and avoid companies that grow by acquisition.

Mere grows in size is of no benefit to shareholders. The value of the shares is determined not by the size of the company as a whole but by the revenues, earnings and dividends per share, and their rate of growth.


2. Avoid highly geared companies like the plague – debt is crippling to management flexibility and corporate growth.

Even though this may sound counterintuitive as equity investors are always inclined to think that gearing is good. Yet the financial graveyard is littered with companies which borrowed too much and came unstuck.

Running a highly geared company also means that the interests of the shareholders is not first in the minds of management but that creditors are. That is never a good situation..

3. Only invest in companies with an attractive return on total capital employed as opposed to simple and high ROE achieved through debt.

Calculating the return on equity while ignoring the rest of capital employed is a grave mistake. Equity, because of write-offs can also be negative. This would mean that even a small profit will give an infinite ROE.

A better measure of measuring returns is to calculate the return on total capital employed which includes debt, and if you like, deferred tax liabilities which is really an interest free loan from the government.

4. The market does 95% of the work for you – your problem is not to duplicate research but to identify errors of logic in company evaluations.

Ian gives an example of banks being the dogs of the stock market in the 1970s and 1980s. Periods of high inflation.

Yet over the five-year period until 2001 banks make shareholders millions. Not because major broking analysts were not analysing them properly. It was because most investors had failed to spot how attractive banks had become in the new low inflation environment.

Ian mentions that he was never in favour of and always sceptical of the idea of new macroeconomic paradigms. He however mentioned that new paradigms for individual companies and sectors really can emerge. Helping to spot them is an important part of a fund manager’s job.


5. Against the market at any point in time, that which looks statistically cheap is probably dear and visa versa.

What Ian is saying is that there is usually a good reason for apparent valuation anomalies.

This can be summed up as generally speaking the market knows more than you do and there is usually a good reason for apparent anomalies, one market sector being remarkably inexpensive for example.

Be very careful before investing in such anomalies without doing thorough research.


6. Only invest in companies where you would be willing to work for the chief executive.

This can usually be determined to the answering of a few simple questions.

7. If you do not understand the product or service do not invest in the company.

The most striking example of this rule took place in the time of the South Sea bubble in 1720 when a company was successfully promoted as “for an undertaking which shall in due time be revealed”.

Compare that to the “clicks not profits” idea from the internet bubble and it just goes to show human nature does not change.


8. Working full-time in investment you will probably only see two or three outstanding investment opportunities in a year – be prepared to wait for them.

Investing can sometimes be a lonely and boring pursuit as Warren Buffett has said many times.

Not being able to sit on their hands is probably the biggest problems fund managers have as they think they must show activity to justify their fees.

That is best summarised by the quote “if there’s nothing worth doing it’s worth doing nothing”.

Portfolio turnover can be a substantial drag on your investment returns. Even with internet dealing decreasing transaction costs it still costs about 1% to get in and out of a position.

And with government looking to tax anything and everything this may go up even more.


10. Entertain your broker at your expense rather than his – this will improve his advice dramatically.

If you are entertained by your broker you often feel duty bound to pay for it by placing an order. But if you can afford your own lunches it’s better to keep your investment objectivity by entertaining your broker.

This way he will feel obligated to give you a few good ideas. Always a good position to be in and probably the best meal you ever paid for.

Like good advice on any matter a lot of the points mentioned above are simple common sense.

The only problem is common sense in not that common.

These are really good ideas you can put to good use. Choose the ones that make the most sense to you and implement them in your investment process, it is sure to make you a better investor.

You can find more information on how to draw up an investment process in the article The best investors have this. Do you?