It is never too late to sell 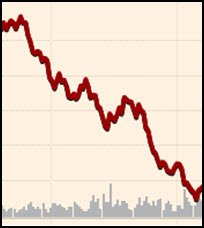 As I have said, in these newsletters I share with you what 20 years of equity investment have taught me, sometimes at considerable cost. I this issue I am going to tell you about an investment mistake I made – it is never too late to sell. One from which you can learn a valuable lesson and prevent you from losing a LOT of money the way I did.

I was going to tell you about two disastrous investments but will leave it at one today as the other is a longer story with even bigger losses.

I can only stand so much embarrassment at a time.

My lesson in selling

The lesson is about my investment in a small UK retailer of upholstered furniture, called SCS Upholstery (SCS). Do not try to look it up as the company is not listed any more. The business was sold to a private equity company and the shareholders received nothing.

I had my eye on SCS for some time, but got really interested when a profit warning by a competitor knocked the share price down 54%. I got even more interested when I read that a month earlier directors bought a total of 524,802 shares at a substantially higher price.

I knew the company had benefited greatly from the property bubble in the UK (people buying more sofas) but at a price to earnings ratio of 2.5 times July 2007 earnings and 1.2 times 2006 earnings it was too cheap to ignore.

The company also had no debt and cash equal to 46% of equity.

Luckily I was wary of the impact of the property bubble and I invested only half the normal amount I invest per company. Little did I know that in the next six months the full force of the credit crisis and deflating of the UK housing bubble would hit the company.

On March 26, 2008 SCS released their interim results (Aug 2007 to Jan 2008) which said sales were down 13%. And due to margins declines the company made a trading loss of GBP8.8m compared to a profit of GBP3.3m the previous year. The dividend was also cancelled.

Because the results were not as bad as the disaster everyone expected, the share price increased to 62p. Selling at this price would have given me a nice profit of 51% but I did not sell. After all, on a price to earnings ratio of only 3.8 times 2007 profits and only 1.8 times 2006 profits I thought the company was still undervalued.

If only I knew what was going to happen next…

Flat on its back

A quick word on why credit insurance is important.

The suppliers to SCS (sofa manufacturers) buy credit insurance to ensure that they are paid by SCS. If SCS cannot pay them the insurance company will. This means that SCS can finance itself through its suppliers by only paying them after the sofas have been sold. With credit insurance cancelled SCS either had to pay cash for their sofas before or after delivery. SCS simply did not have the funds to do so. Even though they had no debt and cash on their balance sheet.

From there it went downhill fast.

The company tried to raise funding to make up for cancelled credit insurance but was unsuccessful and on 23 June 2008 the shares were suspended.

On July 3 the business was sold to Sun Capital Partners, the listing cancelled and the company liquidated.

Why I did not sell everything when I finally decided to sell I can not remember. I may have thought that I should get part of my money out but still leave a bit in the company to recover my loss. Even at a 73% loss my remaining investment was still real money I could do better things with than watch it disappear into thin air.

What can you learn

Why am I telling you this? We all make mistakes. And making a mistake is also not a problem as long as you learn from it and take measures not repeat it.

So what can you learn from my experience?

Firstly irrespective of how large the loss on an investment is, it is never too late to sell. The money you have invested is still real money.

Secondly after this experience I developed strict stop loss and trailing stop loss rules which I follow very strictly. You can read more about how it works in the article titled Never mind what to buy do you know when to sell?