Recently, I read ?Hedge Hogging? by the late Barton Biggs. It was picked up from a local 2nd hand book store ? and I?m delighted to say it was a true value find.

Barton Biggs had an illustrious history as a value investor. His father was a professional investor before him and chief investment officer of the Bank of New York. On turning 18, Biggs received 15 stocks worth around $150,000 ? so by his own admission was born with an investment ‘silver spoon? in his mouth.

Despite this, when he eventually decided he would also go into the investment business, his father told him to read the value investment classic ?Security Analysis? by Ben Graham. Having diligently worked his way through it and going back to him with his dog-eared copy, his father gave him another copy and said ?Read it again.? This gave him a solid grounding in value investing.

On graduating from business school (top of his class) in 1961 he went to the brokerage E.F. Hutton as an analyst ? where the chairman was a very good friend of his father. Four years later, he launched his own hedge fund, Fairfield Partners with $9.7 million, including $200,000 of his own money.

There were some tough lessons in 1970:

?That spring, in the midst of tumultuous political and economic events, I learned the hard way that in a market meltdown, not only does liquidity evaporate, but prices can fall so steeply that all decisions have the potential for serious adverse consequences.?

The fund survived the 1970 meltdown, and overall prospered until 1985 when two of the partners retired. Biggs was recruited as a partner at Morgan Stanley in 1973 where he created a research department and investment management over the next 30 years, serving as its chairman.

In 2003, at the tender age of 70, he launched a hedge fund with two partners, Traxis Partners. This prospered growing to $1.5 billion under management.

The book is particularly interesting since Biggs writes in such an engaging style. But also, through his 30 years as head of investment management at Morgan Stanley, he was a professional investor connected to the top echelons of the business, and witness to several business cycles. A man with staying power.

He writes quite candidly about many of the characters he knew over his investment career giving the reader some great insights. In most cases, the names and situations are altered to protect subjects? anonymity ? which seems to allow for a more open account.

The book is well worth reading with many insights. What are the top 5 lessons from this outstanding hedge fund manager?

Despite his silver spoon investing beginnings, Biggs makes it amply clear throughout the book that active investing is a vocation that requires an insane level of focus, over a long period of time, bordering on the obsessive to be effective. The greatest example of this is Warren Buffett. He says, investing is simple (in concept) but not easy (in practice).

2. The source of investing ideas.

One of the investors that Biggs profiles is a very successful macro- or top-down global investor called ?Tim? (Biggs estimates his fund at $1 billion, probably over half this is Tim’s own money). When asked about his source of investment ideas, he replied that the key was to accumulate a knowledge base over time.

?Then, out of the blue, some event or new piece of information triggers a thought process, and suddenly you have discovered an investment opportunity. You can?t force it. You have to be patient and wait for the light to go on. If if doesn?t go on, ?Stay close to shore.??

This again is echoed by Buffett who famously when asked about how he got started says he read the 10-Ks of every listed company. He suggested the insights and information there would hold any investor in good stead. Astounded, the interviewer said at the time this was over 27,000 companies. How did he do it? Buffett’s answer ? ?Well, start with the A’s.?

Fund managers in today’s investment climate are under intense career pressure. Investors are so keen for their fund managers to maintain a steady, smooth investment return that conventional risk measures now include volatility. This leads to short-term thinking and the institutional imperative ? where fund managers that are not steady are cut, so they just go for the safe option, often hugging an index.

But true value situations by definition are already outside of safe conventional thinking. That’s why they arise ? eventually they revert to the mean, but until they do they can appear as doomsday scenarios.

Looked at another way, say the price of company A stock drops 50% in the short-term due to unrelated bad news about a competitor, company B, with no change in the underlying fundamentals of company A. Does this make company A less attractive (due to volatility) or more ? as you can buy the same now for half price?

What would you rather have over time in your portfolio ? a safe, steady 10% or a lumpy 25%?

In other areas of life, taking part is often said to be as important as winning (sometimes more). Not so in investing. By this I don?t mean you have to beat the pants off everyone else who’s in the game. But you do need to beat the index ? or else you?d be better off spending your time elsewhere and just invest in index funds. So few seem to be able to do this over time. Those who do, whether as professional or private investors, are richly rewarded.

What do you have to do to earn the performance? Hard work and dedication over time are important (as mentioned above). But every investor has to eventually find his or her own niche and own style. This requires patience, inward reflection, and understanding your temperament.

This point is not directly from the author. It’s something that occurred to me while reading the book. Biggs? is focused entirely on professional investors (i.e. they do it as a career and are managing a fund). In this world, salaries can be as big as telephone numbers, even for competent but not outperforming journeymen.

He refers to a salary of $200,000 per year as small. He mentions one manager that worries his ?comp? maybe cut from a comfortable $1.2 million per year to six-figures as the industry becomes more competitive with low-cost ETFs and index funds. When talking about investors seeding their start-up hedge funds with personal cash, he suggests anything less than a solid seven figures seems to be paltry.

This is where my view differs from Biggs?. All investors should get good at saving. My family and I live very comfortably on less than 1/4 of the income above (including all living expenses but not funds directed to investments). And high-6 digits (in $ terms) would be enough for me to reach financial independence very quickly and become a full-time investor. It’s much closer than you think if you can ratchet up your savings rate.

Focus on financial independence rather than income and you can become much more effective long-term as an investor (and, ironically, more wealthy!)

Investing is no walk in the park but becoming successful at something never is. If this doesn?t sound like you, think about index investing. But if it does, if the game fascinates you and fires your curiosity, take the long-view and become a student of investing. 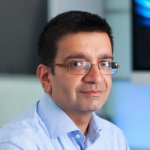 I am a value investor and occasional writer on investment blogs. In my day job, I help companies build R&Dcollaborations with a UK University; previously I was a medical doctor. I enjoy walking, tai chi and watching my son’s football team (not all at the same time). I am a curious reader, though find the more I read the less I know.

Feel free to connect on LinkedIn